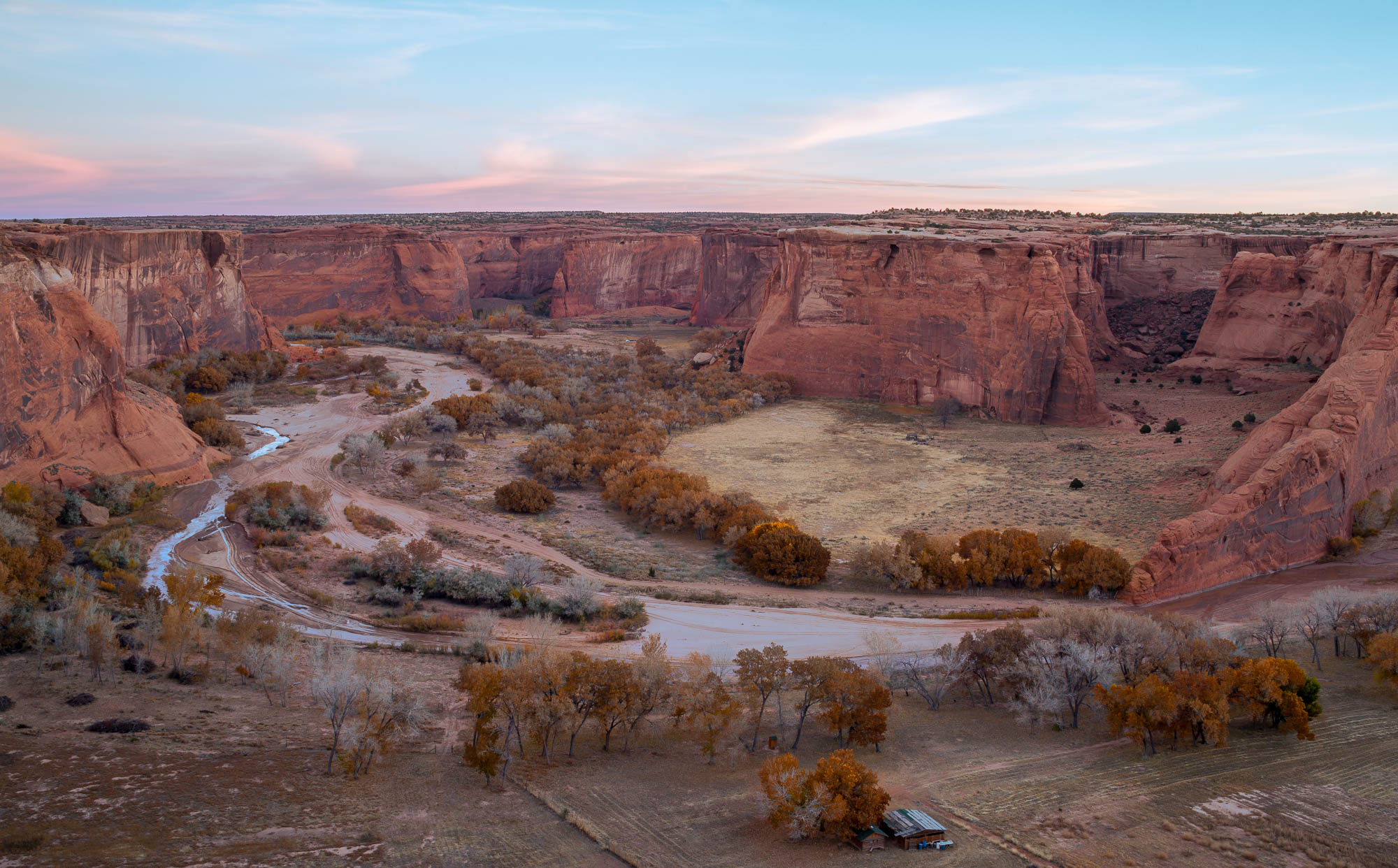 This is the backstory on how i took the image Tsegi Overlook, and the work done in Lightroom and Photoshop to arrive at the final image of this scene originally captured in November 2013.

In Navajo, tse means “rock,” and -gi means “at” or “in”. As a word, tsegi then means “canyon” or “rock canyon.” The word is a close approximation of Tséyi, the Navajo name for the place others call Canyon de Chelly, where chelly is a French variation of the word tséyi.

In the summer time the Navajo Indians are living and farming inside the canyon. In the wintertime they are living in Chinle.

I attended the Page Fine Art Photography Summit with Alain Briot and guest speaker Jeff Schewe in November 2013, and had the opportunity to photograph for several days in Page, and on the workshop following the summit, one of the places we visited was Canyon De Chelly near Chinle in Arizona. The image “Tsegi Overlook at Dawn” was taken before sunrise one morning, and I will show you how I worked on that image back in the studio.

The first thing to do when creating a photograph, is of course to chose your composition, set up your tripod and camera, and capture the image. When I make an image I always photograph in raw format and expose so that the greatest possible amount of data is available for later processing. This meant that the images out of the camera don´t look like much, because they are not meant to be used without any post processing.

This image was created by merging together 3 images taken wit my Canon TS-E 45mm f/2.8 lens as described in my article Build a View Camera with your Canon R5. And the images below was the images as they where captured in raw format. 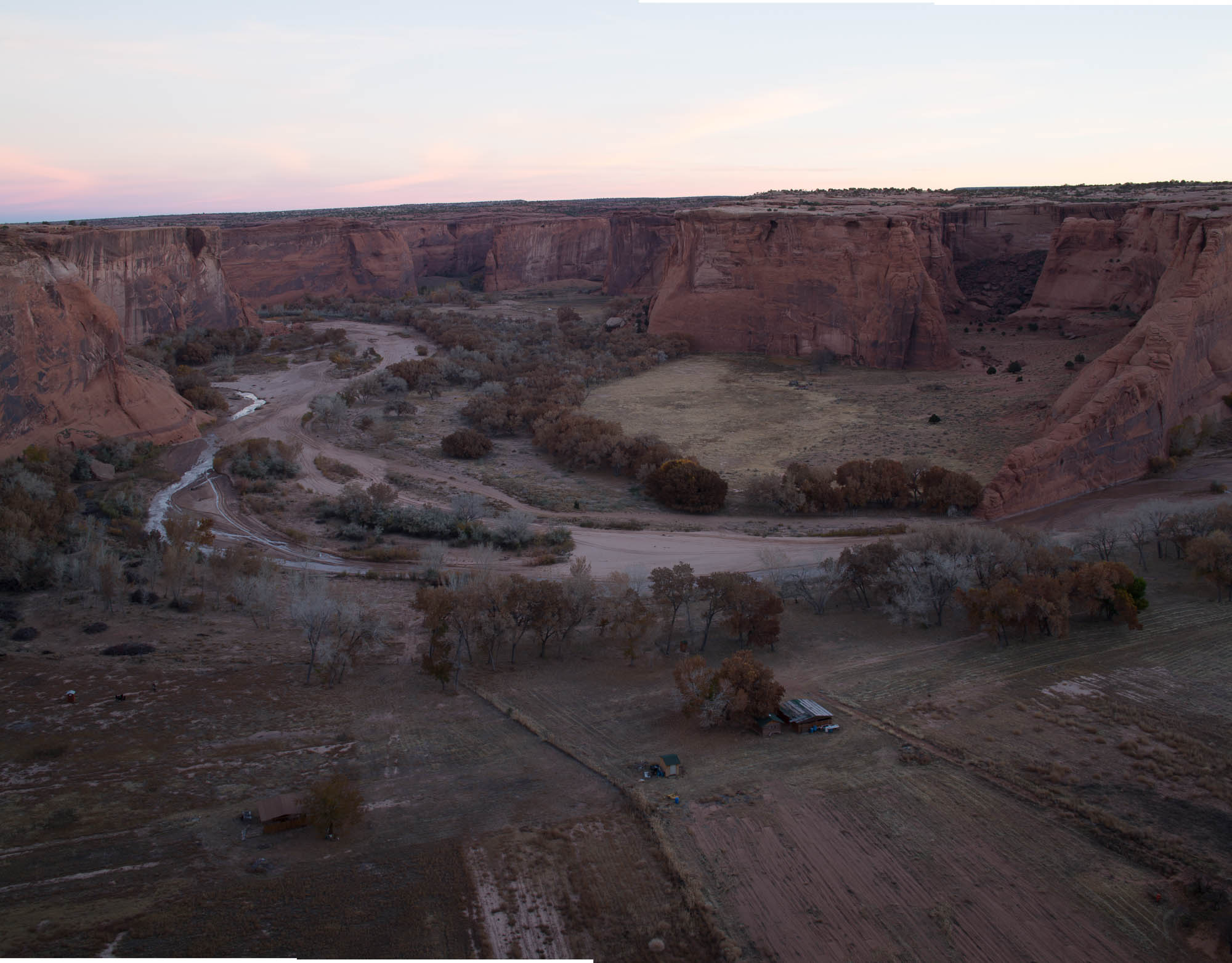 Arizona, United States - November 2013
This is how the mage would look if I just merged the three images together without any further processing.

It’s important to do the white balance and the major tonal adjustments on the raw files, because those files have the most information available for editing.

At this stage, you can se that I have corrected the white balance, done the major global tonal adjustments like exposure and lighting up the darker areas of the images, and recovered details in the highlights. I have also done some of the global color corrections.

The first step in Photoshop was to merge the images together. Below you can compare the RAW captured image with the result after working on the global colors and tones in Lightroom. This will probaly give you an idea about why this step is so important to an image. 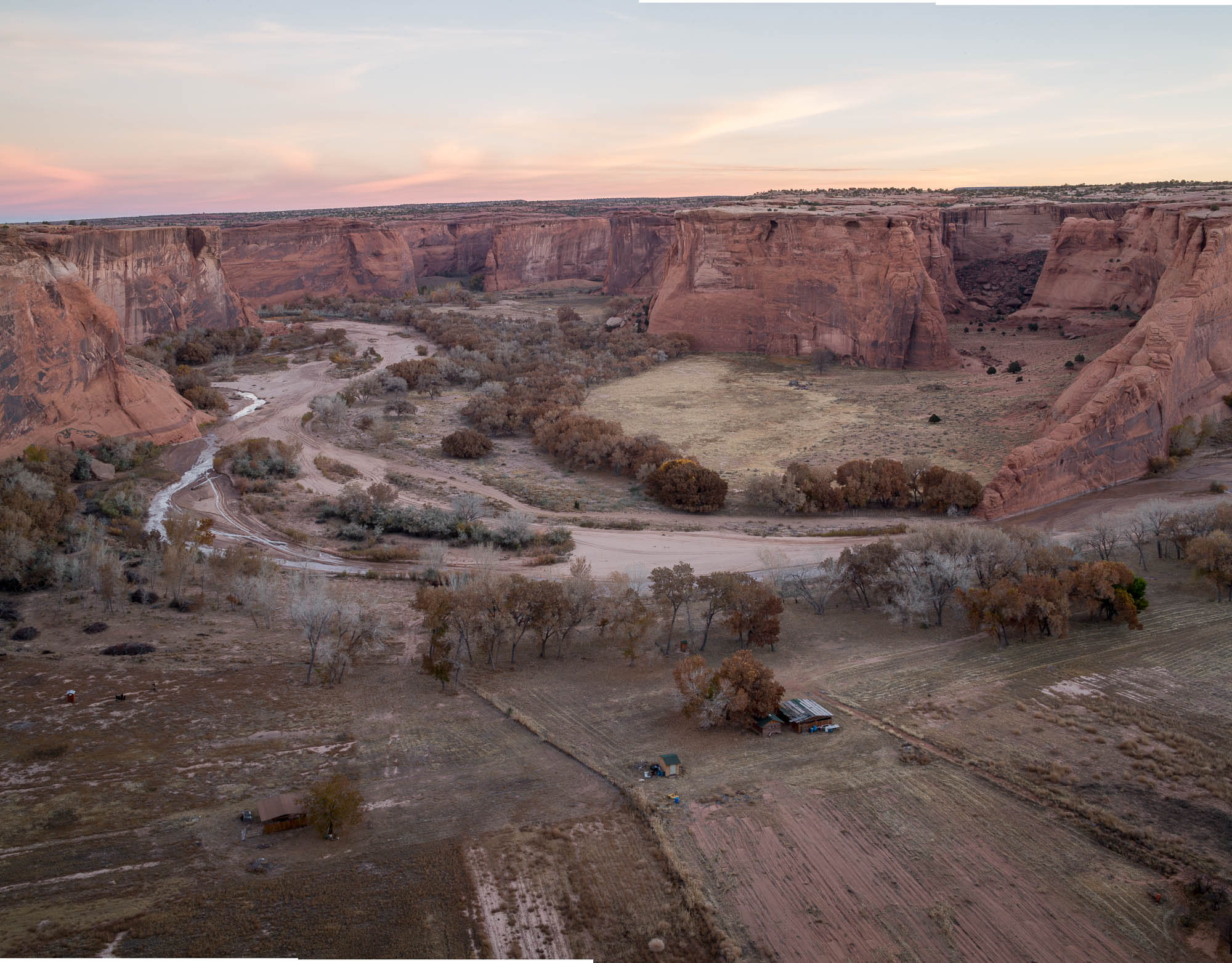 When that is done, the next step is to crop and level the image so the horizon looks straight. The original image was actually level it’s the horizon that it’s a getting lower towards the left. But that doesn’t look right, so I choose to level the image in a way that makes the horizon to look level, even if it’s not if you are standing there looking at it in reality.

Finally I do the final cropping and start to work on the colors in the image, to bring out the image I want to create. The final image is below.

Based on reading this page, these pages may also be of interest to you: