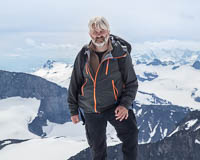 I attended the Zion Fine Art Photography Summit with Alain Briot and guest speaker Jeff Schewe in November 2012, and had the opportunity to photograph several days in Zion. I used some of that time to photograph the Virgin River and The Watchman from several locations. 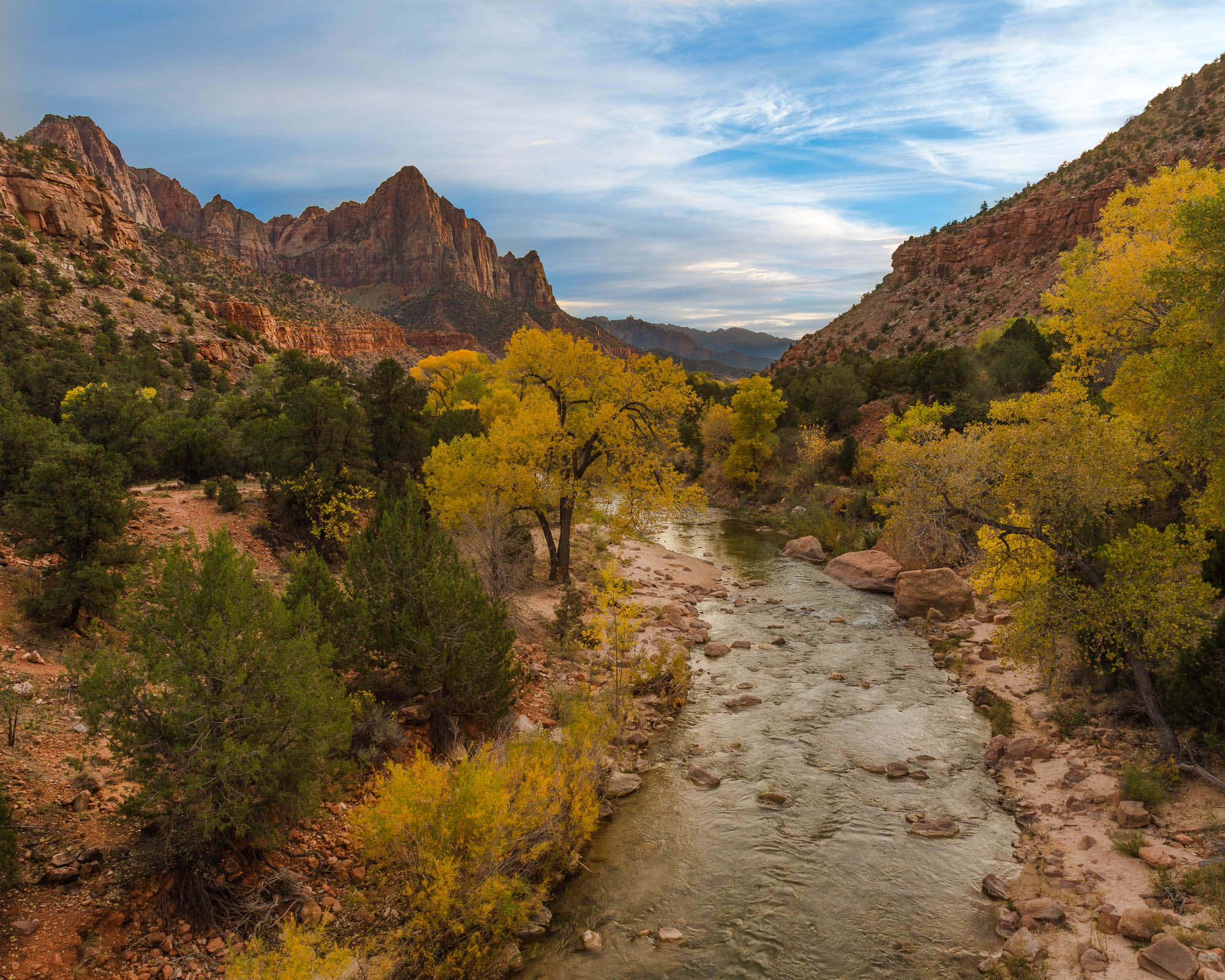 This is the classic view of The Watchman from the Virgin river bridge at sunset. This view have a very nice composition with the river as a leading s-curve into the image towards The Watchman mountain in the background.

This is a nice shot, so even if everybody else also have the shot, it’s probably worth it to make one yourself just to have it and be done with it.

Taking this photograph one will stand on the bridge with cars driving by right behind you. Access is easy as you can park close by, but at sunset you will stand shoulder to shoulder with all the other photographers there. 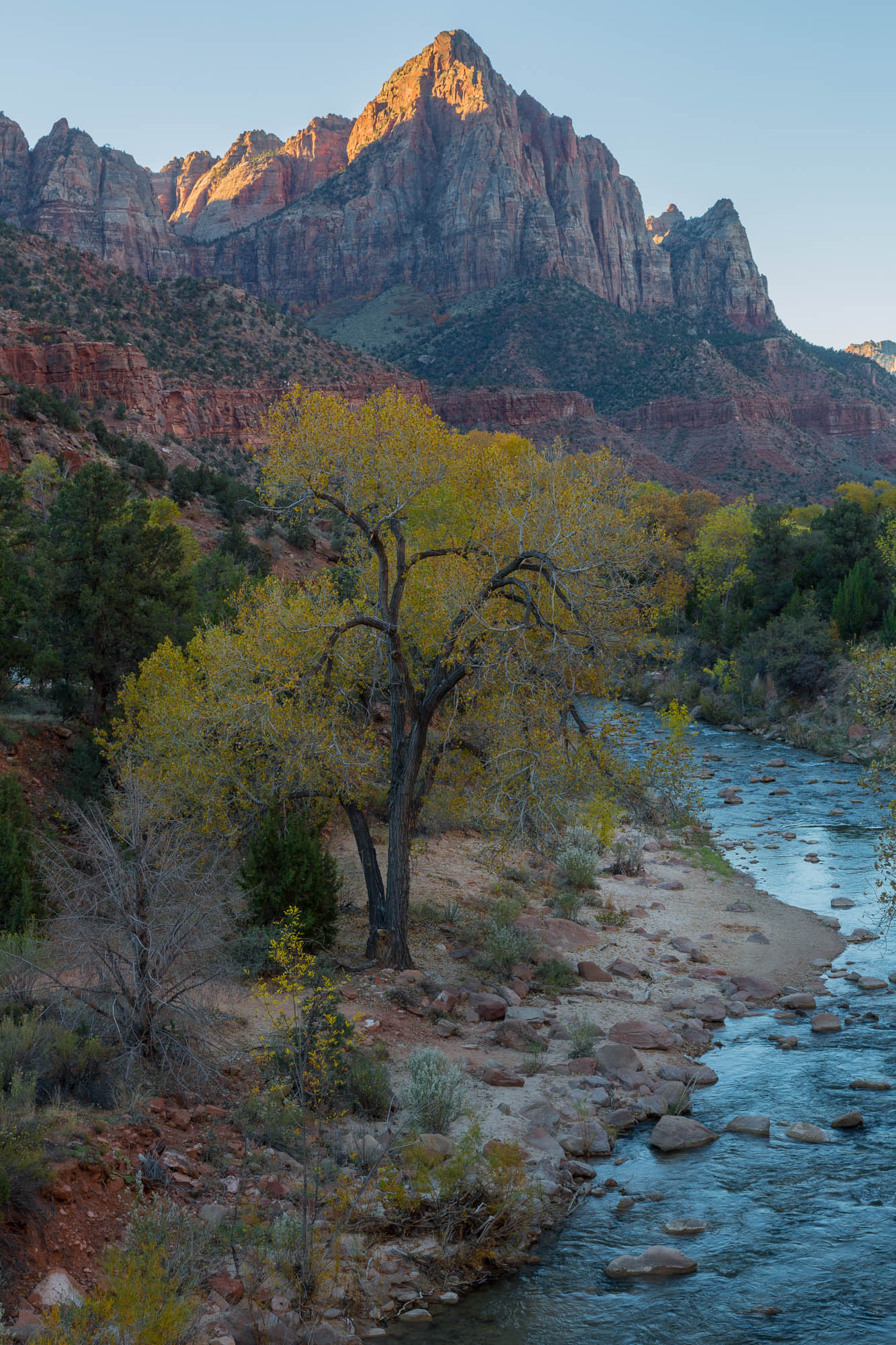 The shot will also work as a sunrise shoot, as seen here, and at sunrise you are likely to have the bridge for yourself, as sunset is the offical right time to photograph this scene.

This is a great spot, and the only thing “wrong” with it, is that “everybody” with a camera has taken a photograph from this bridge, so you will be hard pressed to be able to make a new interpretation of this scenery. 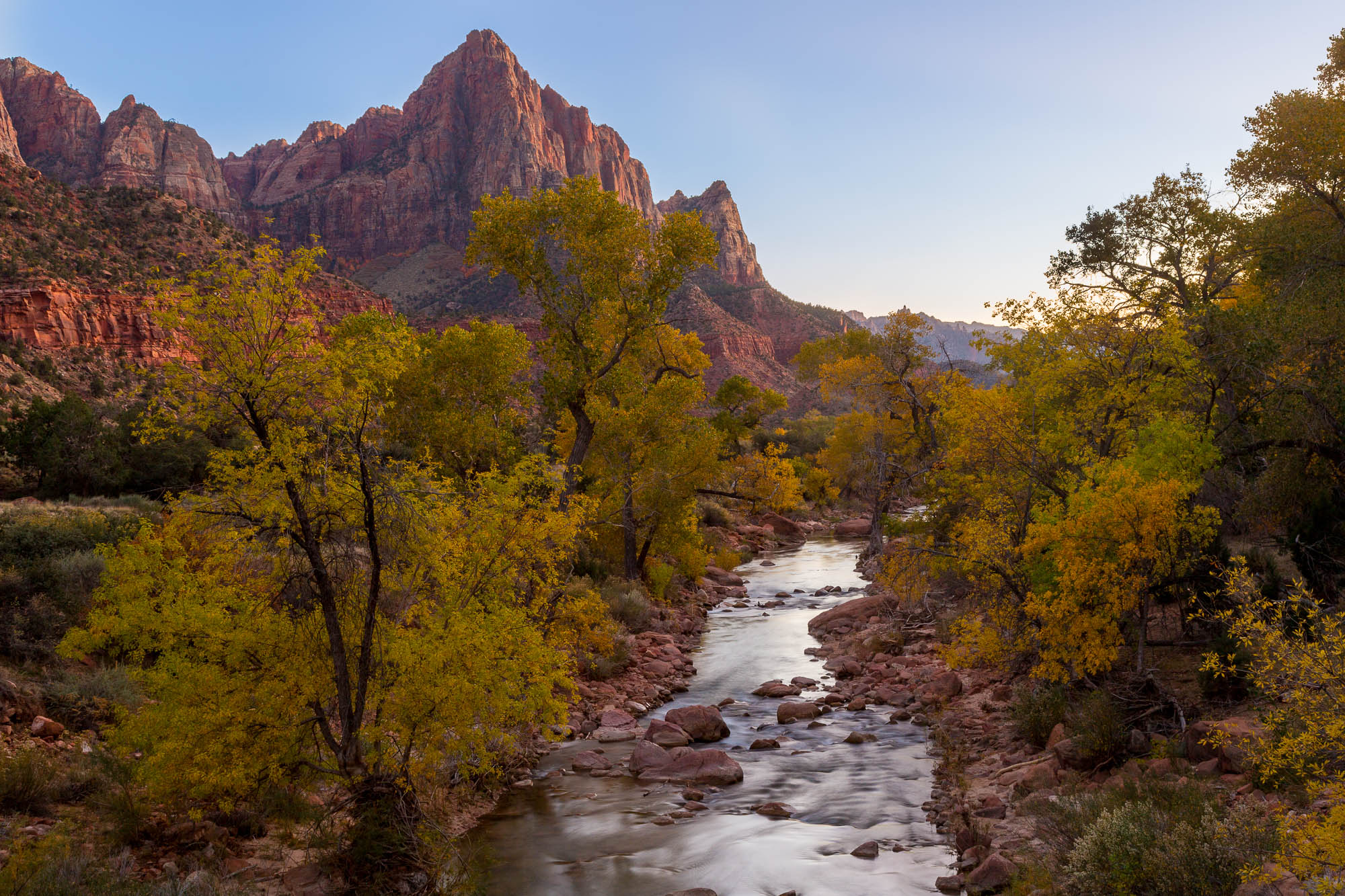 The view from the second bridge along the Pa’rus Trail is almost the same as the one from the Virgin River Bridge. The main difference is that one is closer to The Watchman, and that makes the mountain more prominent in the images taken from this location.

At sunset you will probably be the only photographer on this bridge. And that is a good thing, because the bridge is a steel construction, so the whole bridge will move when somebody walks on it. But is is stable enough for a tripod as long as nobody is moving. 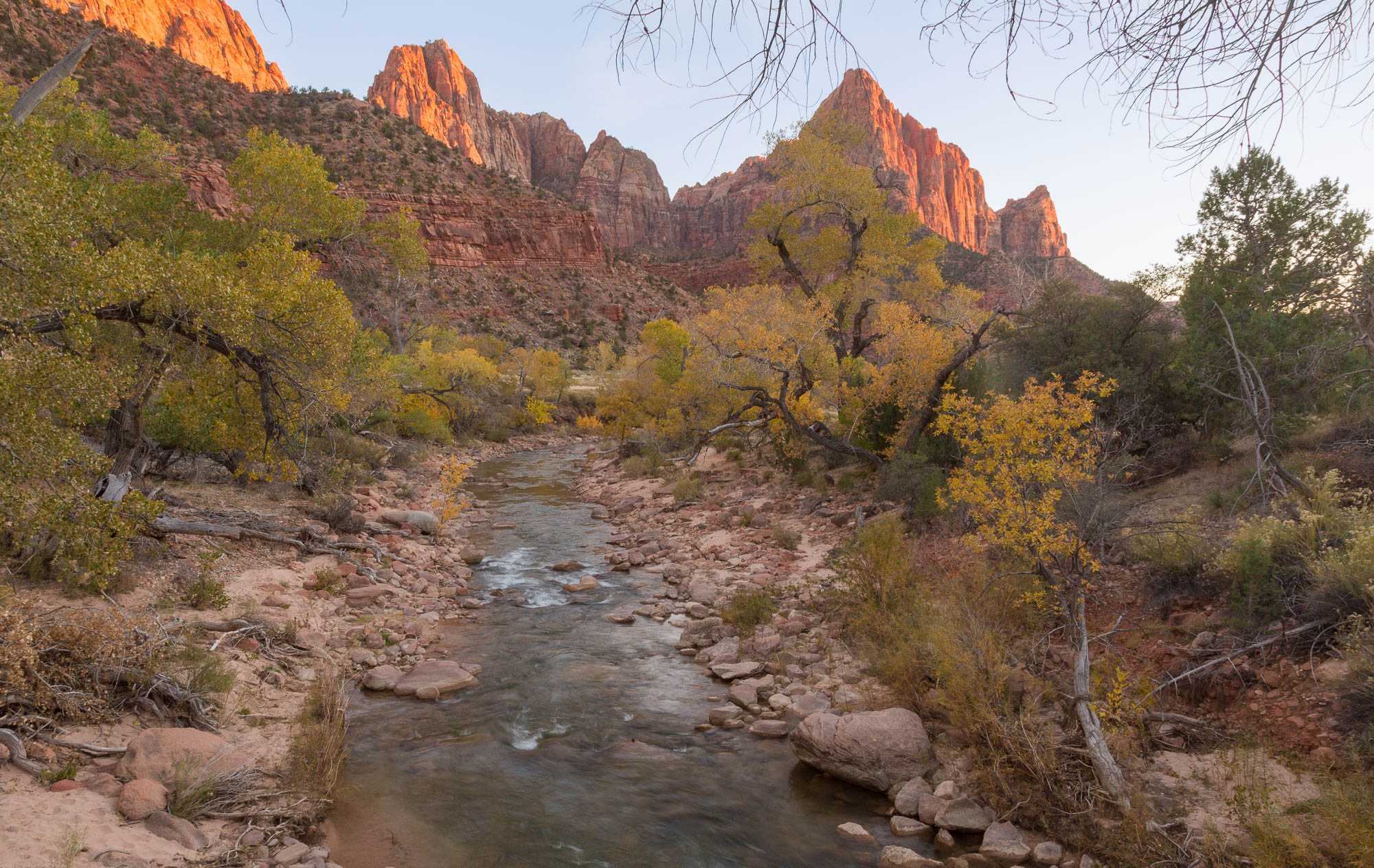 The view from the third bridge along the Pa’rus Trail is a bit different, it’s closer to The Watchman, but there are also more vegetation around the bride, making the view a bit different. But you still have the river leading the eye into the image.

This is also a place that you probably will have for yourself even at sunset. And as with the previous bridge, that is a good thing, because this bridge is also a steel construction that will move when somebody walks on it.

Along the Pa’rus Trail from the Campground 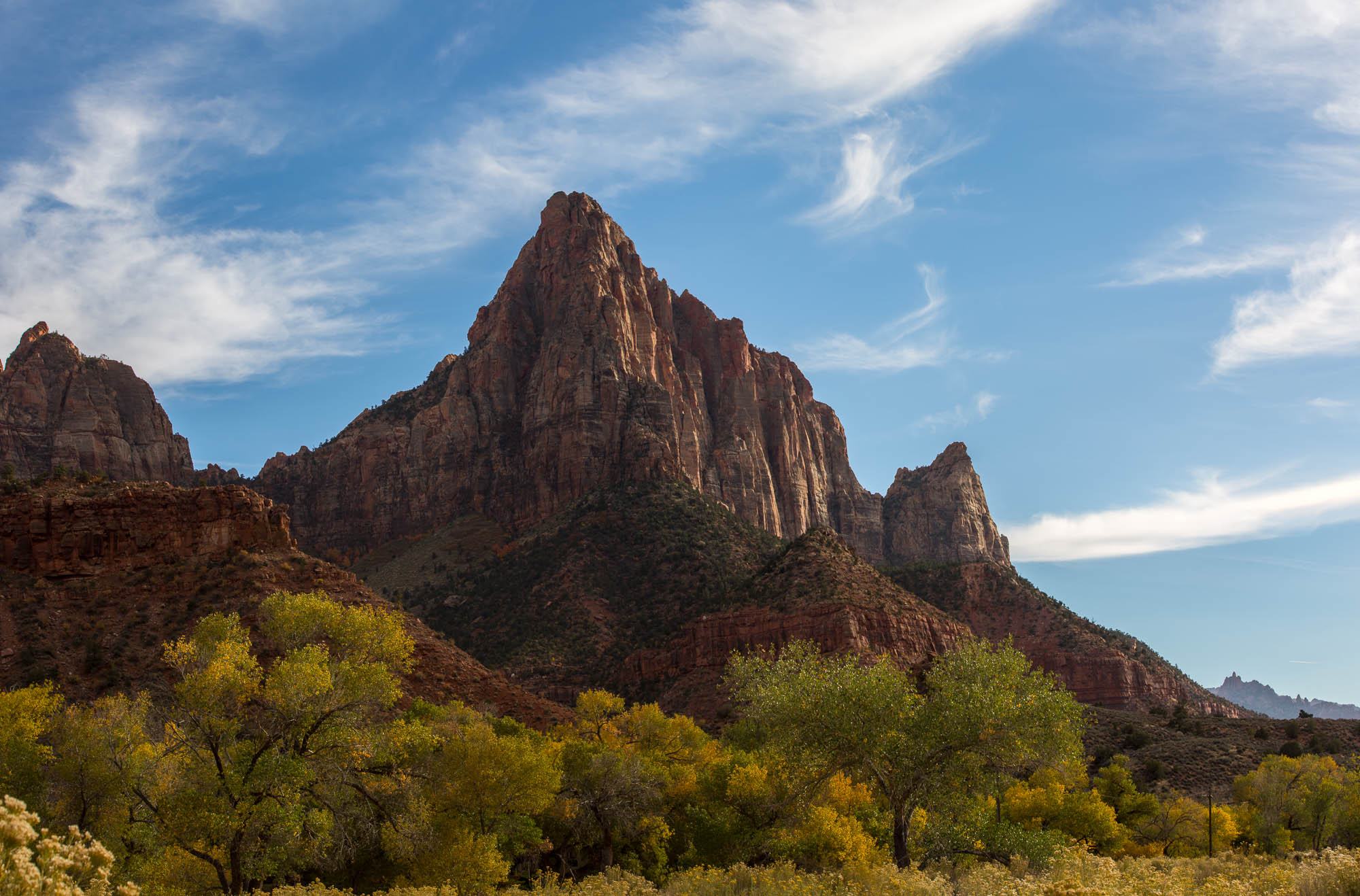 You don’t have to walk far, just along the Pa’rus Trail from the campground you can find this view.

Fields along the Pa’rus Trail